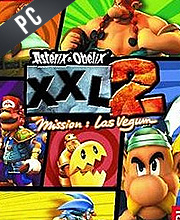 It's a digital key that allows you to download Asterix XXL 2 Mission Las Vegum directly to PC from the official Platforms.

How can I find the best prices for Asterix XXL 2 Mission Las Vegum CD keys?

Asterix XXL 2 Mission Las Vegum: Mission: Las Vegum is an action–adventure video game from Microids. This is a remaster of the 2006 game of the same name.

The protagonists of the game are two French comic book characters named Asterix and Obelix. Players will also get to see some spoofs of many classic games here. Famous video game characters like Mario, Sonic the Hedgehog, Crash Bandicoot, Rayman, Pac-Man, Ryu, and Lara Croft can be seen resembling some of the game’s characters.

The game starts out as Julius Caesar is planning to conquer Gaul in order to build a theme park that is called Las Vegum. For some reason, Getafix swears loyalty to Caesar and Asterix and Obelix are obliged to come to his rescue in Las Vegum. The two are helped by a Roman spy named Sam Sheiffer.

Zoom 1m 3m 1y All
Track product
GOG.COM CD KEY : You need to register on Gog.com, then use the GOG Key to download and activate your game to play Asterix XXL 2 Mission Las Vegum.
EU STEAM CD KEY: Requires an EUROPEAN IP address or you must activate it with a VPN (Virtual Private Network) in order to play Asterix XXL 2 Mission Las Vegum. Might have languages restrictions or language packs. Read the description on the store game page to know if the EU IP is only needed for activation or for playing also (maybe on EU Servers). Most of the stores offer you their help, or show you how to do this with a tutorial to follow.
STEAM CD KEY : Use the Steam Key Code on Steam Platform to download and play Asterix XXL 2 Mission Las Vegum. You must login to your Steam Account or create one for free. Download the (Steam Client HERE). Then once you login, click Add a Game (located in the bottom Left corner) -> Activate a Product on Steam. There type in your CD Key and the game will be activated and added to your Steam account game library.
PC Win 10 / Xbox Key. Digital code which allows you to play on both Xbox and Windows 10 PC. See below for more informations.
Bundle
Standard Edition
Compare Choose & Buy Download (772)

I am a big fan of Asterix & Obelix comic series and films since childhood, and of course I enjoyed Asterix & Obelix XXL series on playstation 2, the enhanced graphics of this remake are top notch, I am excited to play the remaster and bring back memories!