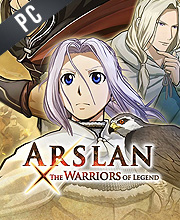 What is Arslan The Warriors of Legend CD key?

It's a digital key that allows you to download Arslan The Warriors of Legend directly to PC from the official Platforms.

How can I find the best prices for Arslan The Warriors of Legend CD keys?

Allkeyshop.com compares the cheapest prices of Arslan The Warriors of Legend on the digital downloads market to find the best sales and discount codes on trusted stores.

Arslan: The Warriors of Legend is a tactical action video game that is developed and published by Koei Tecmo Games Co., Ltd. The game is a merging of the novel, manga and anime The Heroic Legend of Arslan as well as with its Warrior series.

Take on the story of Arslan, the young crown prince of Pars who was forced out of his father’s kingdom. His father the king has been betrayed and defeated having his entire kingdom conquered. Arslan with a few of his trusted companions must rise up and build an army to reclaim his father’s kingdom and liberate it from the oppressors.

Gather your forces and wipe out the armies of your enemies. Choose among the three types of units in the Mardan Rush from Cavalry, Infantry and Archers. As a single player going through hordes of enemies, the Chain Strike will be readily available for you. With the Chain Strike you can skillfully switch through your different array of weapons to create extended combos. You will also be able to customize your own weapons as well as attack styles in Weapons Arts. Combine the Weapon Arts and Chain Strike and you will be a force to rekon with.

Get ready for a new level of exhilarating action with Arslan: The Warriors of Legend.

Zoom 1m 3m 1y All
Track product
EU STEAM CD KEY: Requires an EUROPEAN IP address or you must activate it with a VPN (Virtual Private Network) in order to play Arslan The Warriors of Legend. Might have languages restrictions or language packs. Read the description on the store game page to know if the EU IP is only needed for activation or for playing also (maybe on EU Servers). Most of the stores offer you their help, or show you how to do this with a tutorial to follow.
STEAM CD KEY : Use the Steam Key Code on Steam Platform to download and play Arslan The Warriors of Legend. You must login to your Steam Account or create one for free. Download the (Steam Client HERE). Then once you login, click Add a Game (located in the bottom Left corner) -> Activate a Product on Steam. There type in your CD Key and the game will be activated and added to your Steam account game library.
Bonus Edition
Standard Edition
Compare Choose & Buy Download (743)

great for a fan of samurai/dynasty warriors series! even if you are not game is still pretty neat . slaughtering thousands of soldiers in matter of minutes now in HD

Good combat mechanics , interesting story , nice music , many collectables and new options that we didnt have in Warriors series.