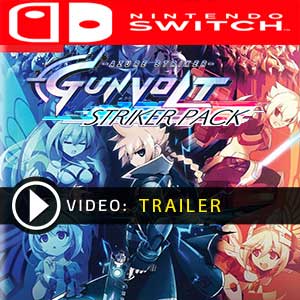 It's a digital key that allows you to download Armed Blue Gunvolt Striker Pack directly to Nintendo Switch directly from Nintendo eShop.

How can I find the best prices for Armed Blue Gunvolt Striker Pack on Nintendo Switch ?

Get to take control of Gunvolt’s high-speed mobility and a slew of electrical attacks. Your supernatural powers are the key to help you in fights for the freedom of your nation. The Sumeragi Group is the enemy as their tyrannical ways of this massive conglomerate has already spread. Add into the mix the invasion of the super-powerful group known as Eden and you have your hands full.

The Nintendo Switch version of the game comes with so many upgrades like it now runs at 60 FPS with an upgraded UI, high-resolution event graphics as well as the complete DLC catalog of the game. HD Rumble compatibility is also available as well as a brand new vocal track for the character Lumen.

JAPAN BOX GAME : This is a Japan import of Armed Blue Gunvolt Striker Pack Nintendo Switch in Box Edition (DVD-CD ROM). This is not a downloadable product. Please read the sellers page for any additional costs (taxes, shipping), delivery time for your country and languages available.
NINTENDO CODE : This is a digital code for Armed Blue Gunvolt Striker Pack Nintendo Switch. Use the download code on the Nintendo eShop of your Console. Once connected to the Nintendo eShop, you can enter and redeem the Download Code. Read carefully the store description about any language and region restrictions.
Standard Edition