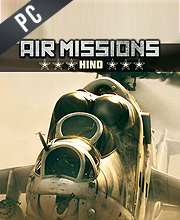 It's a digital key that allows you to download Air Missions HIND directly to PC from the official Platforms.

How can I find the best prices for Air Missions HIND CD keys?

Allkeyshop.com compares the cheapest prices of Air Missions HIND on the digital downloads market to find the best sales and discount codes on trusted stores.

Air Missions: HIND is an action, casual, indie, simulation video game that has been developed and published by 3Division.

This exciting combat flight simulator will have you flying a Russian Mi-24 HIND assault helicopter in no time. This flying tank can be equipped with badass weaponry! Choose from the powerful UPK 23 machineguns,GUV gun pods, devastating FAB bombs and a whole lot of variety of missiles.

Get to tear up the skies of the three massive battlefields of the Barents Sea, Eastern Europe and Central Asia. Fifteen impressive missions will give you the best air battles ever. These are based on fictional conflicts that you will greatly enjoy.

Air Missions: HIND will give you so much great game modes: Singleplayer, Multiplayer, Campaign Missions, Death Match, Instant Action, and Co-operative Missions. All these modes will give you hours and hours of amazing air conflicts.

Be the best helicopter pilot there is in Air Missions: HIND

STEAM GIFT : A Steam gift is a one-time transfer you receive. You activate and install Air Missions HIND to play on Steam, it is a non-refundable game that stays in your Steam games collection. Please read the store description about any language or region restrictions.
STEAM CD KEY : Use the Steam Key Code on Steam Platform to download and play Air Missions HIND. You must login to your Steam Account or create one for free. Download the (Steam Client HERE). Then once you login, click Add a Game (located in the bottom Left corner) -> Activate a Product on Steam. There type in your CD Key and the game will be activated and added to your Steam account game library.
Deluxe Edition
Standard Edition

Good qaulity Apha simcade game.
Finally a helicopter with great flight physics (actually feels like you have to fly it with some skill involved, looks great and is tons of fun to play.