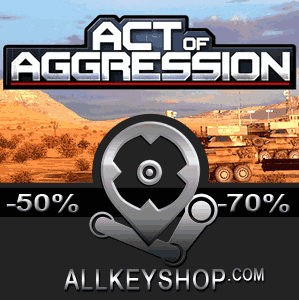 What is Act of Aggression CD key?

It's a digital key that allows you to download Act of Aggression directly to PC from the official Platforms.

How can I find the best prices for Act of Aggression CD keys?

Allkeyshop.com compares the cheapest prices of Act of Aggression on the digital downloads market to find the best sales and discount codes on trusted stores.

Act of Aggression is a video game published and developed by Strategy Eugen Systems and Focus Home Interactive.

In a future devastated and very hostile, you have to try to build your town and protect against aggressors, taking care to collect various resources and training military units.

It is in 2025 that the story unfolds. The developers have taken care to avoid the frustration well known in the STR which often start by immediate battles between different players to possess some very important resource deposits for the development of their base.

They have allowed you time to gather deposits and quietly build your camp before leaving to conquer new land. So you have the time to put up your defenses without fear of being directly destroyed. This is very significant because it gives more meaning and depth to strategy.

You have to find the right balance and do not miss the opportunity to demolish your opponents!

EU STEAM CD KEY: Requires an EUROPEAN IP address or you must activate it with a VPN (Virtual Private Network) in order to play Act of Aggression. Might have languages restrictions or language packs. Read the description on the store game page to know if the EU IP is only needed for activation or for playing also (maybe on EU Servers). Most of the stores offer you their help, or show you how to do this with a tutorial to follow.
STEAM CD KEY : Use the Steam Key Code on Steam Platform to download and play Act of Aggression. You must login to your Steam Account or create one for free. Download the (Steam Client HERE). Then once you login, click Add a Game (located in the bottom Left corner) -> Activate a Product on Steam. There type in your CD Key and the game will be activated and added to your Steam account game library.
Limited Edition
Standard Edition

Best store to buy is Greenman gaming, a very nice shop with very good price for the game with the preorder bonus

The best price is at 2Game.com. Act of Aggression has a magnificent appearance.

2game.com is the best store to buy Act of Aggression. 🙂

Might give this a try at the right price on Allkeyshop

I think KINGUIN is the best site for buying this game ! 😉