Assassin’s Creed Valhalla: Ten essential tips for starting the Viking adventure – This guide will help you get started without any problems.

Whether it’s combat, the skill system, or building settlements after the journey to England, we’ll guide you smoothly and safely into the newest title in Ubisoft’s Assassin series.

In our beginner’s guide to Assassin’s Creed Valhalla, you’ll find ten tips that will help you master the start of the Viking adventure.

1.8 Attention to the level of the areas

1.9 Which buildings do I build first?

At the beginning of the game, you start as Eivor in Norway.

After the atmospheric intro, you can choose between a male or female character.

After the cutscene, you free your crew in a first quest and secure your way home.

Immediately, in the first smaller area, you will find a viewpoint, which you synchronize. Before you continue the main quest, quietly loot the camp around the dock and restore your health with food.

Then quietly head to the yellow dots west of the main quest. Here you can kill a few enemies and loot the first chests to collect riches.

How to proceed in battle, what to look out for in the tutorial area and which first steps to take after your journey to England are explained in the following basic tips. 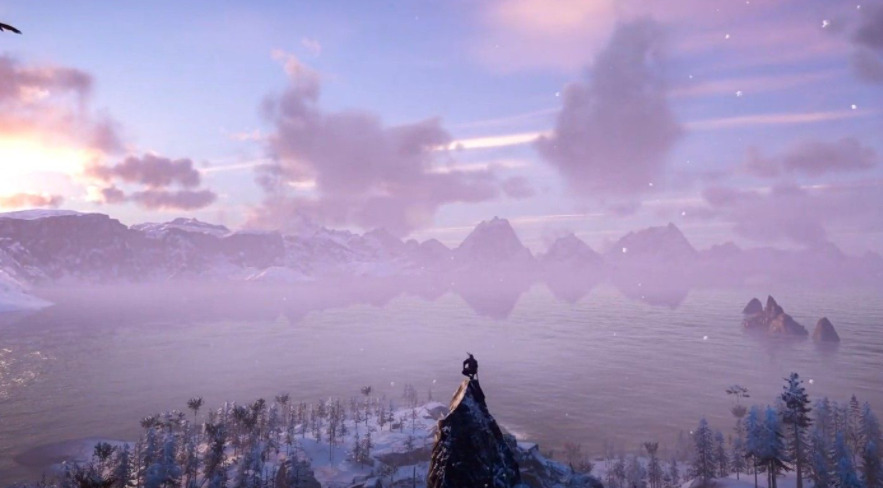 Just as in other Assassin’s Creed video games, you will climb to vantage points like towers, ruins, and mountain peaks.

After synchronization, the map is revealed and shows you yellow, white, and blue points.

While you’ll often find chests as well as armor pieces and knowledge books at yellow points, white points offer you artifacts and blue points puzzles or small NPC-dependent side missions.

The latter usually provide a reward as well as experience points.

Apart from the main quest, you should check out the dots now and then.

Note: In the starting area, some of these points are not yet accessible.

To get some riches, you will have to destroy parts of the environment. Aim at individual parts of locked huts with the bow. As soon as the crosshairs turn red, you have found a weak spot.

Keep a close eye on your surroundings for inaccessible treasures. 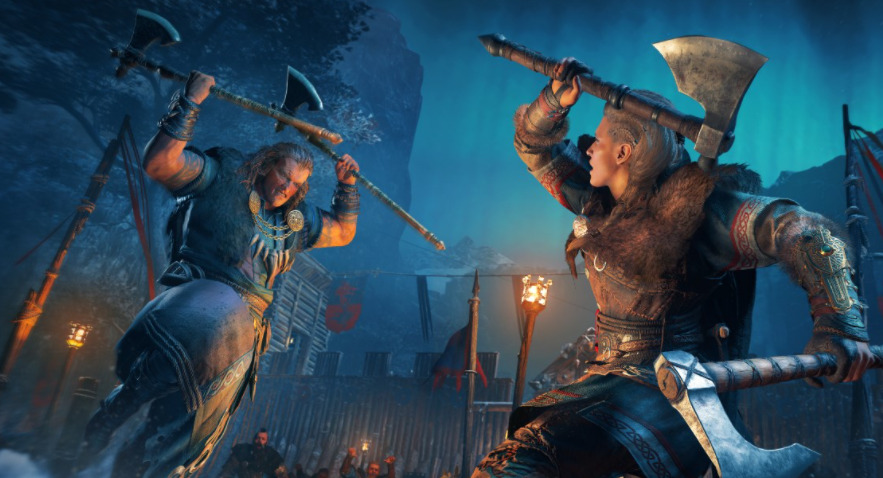 During the liberation of your Viking companions, you will be introduced to the game’s combat system. 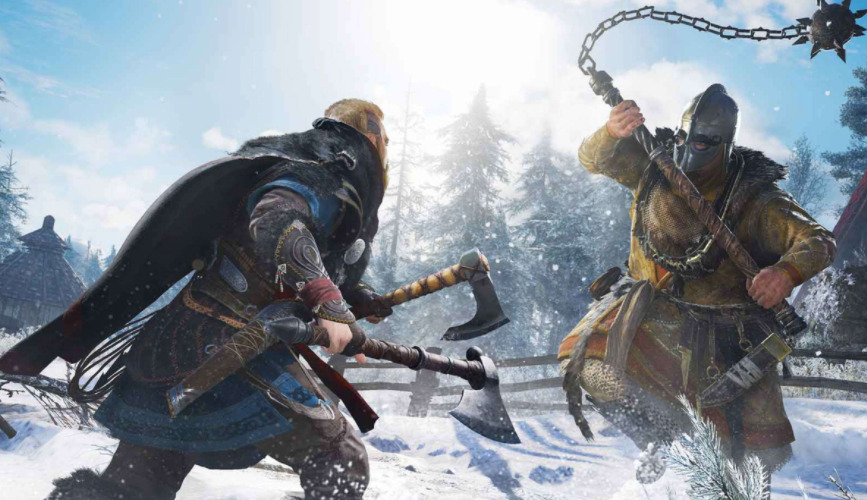 Note: While you can endlessly climb steep slopes in Assassin’s Creed Valhalla without getting tired, Eivor has a stamina bar in battles.

Be careful not to deplete it entirely by dodging and attacking endlessly. Otherwise, you won’t be able to attack or block until the bar is full again. You will fill the bar faster with light attacks. In addition to chests and random encounters, knowledge books are available in the game world and are worth collecting as soon as possible,

These equip Eivor with special attacks, which you distribute to the face buttons. You trigger this by holding down either the L2 or R2 key plus the corresponding front button. L2 skills are related to the bow, R2 skills to melee weapons.

If you find a second knowledge book for a skill, you improve the ability. Again, some of the knowledge books are not yet accessible in the tutorial area. Return later to take them with you. In addition to skills, ammunition for the bow and meals are essential in battle.

You should always clear out baskets and jars during your scavenging to collect leather, iron ore, and other materials.

At the beginning of the game, you’ll store a meal in your pockets to use for healing in battle. We recommend that you upgrade the meal pouch to increase recovery.

In the inventory menu, you’ll find hints on what to do for the pouch’s next level. The same applies to the quiver.

The more arrows you have on raids or in the battle for a stronghold, the easier it is to use ranged attacks, which are naturally less risky.

Before you invest in upgrades for armor or weapons, be sure to check if there is an upgrade available for your quiver or meal bag. In Assassin’s Creed Valhalla, your weapons or armor belong to a specific category. You can see this by the symbols.

They will be a wolf (blue), raven (yellow), or bear (red) in the inventory menu.

You expand your skill tree with ability points corresponding to the directions and colors of the three animals.

At some nodes, you level up several skills at once, depending on matching equipment. So look for nodes that give a bonus to, for example, armor or weapons with a raven affiliation – as long as you also use raven gear or weapons. Did you know that you can also use a torch for poorly lit areas? You can even throw them to set houses and more on fire in some missions.

To do this, hold down the corresponding button on the D-pad on the controller. Now select the torch with the analog stick at the top and use it. 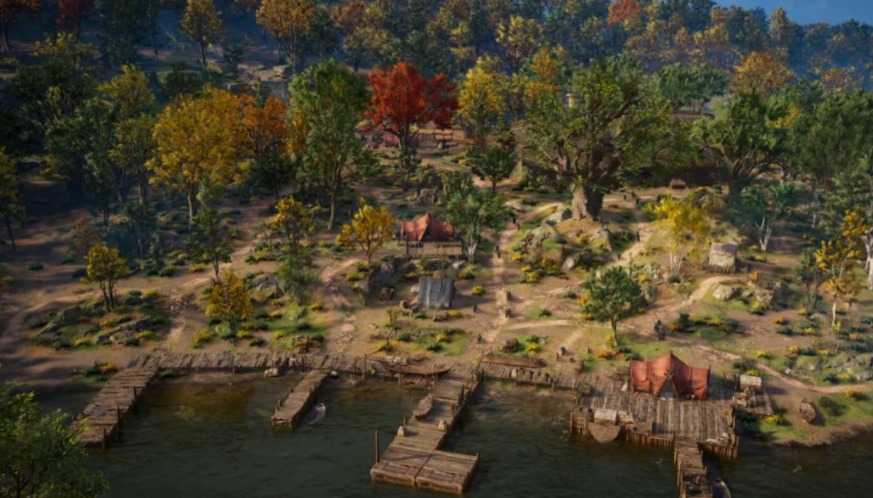 Once you’ve completed the tutorial and arrived in England, you’ll recapture a settlement from raiders.

In doing so, you’ll capture raw materials and crates. You will need these to construct new buildings in your settlement. The more buildings you build, the more life you get.

1.8 Attention to the Level of the Areas 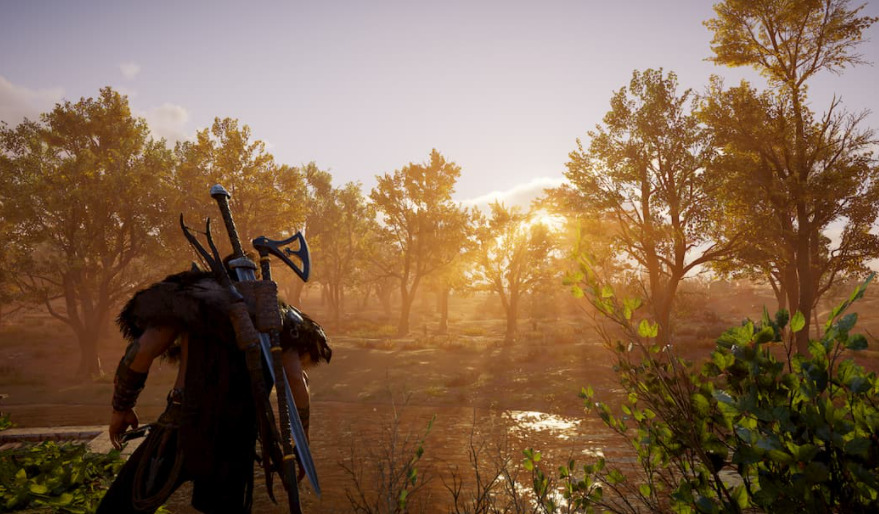 Monasteries and forts, in particular, are well guarded but also offer good loot.

Pay attention to the recommended level for the province you are in. For example, if you attack a monastery where enemies have a red skull symbol next to their head, they are still too strong for Eivor’s current level.

It would be best if you tackled these areas later. The so-called zealots are also strong enemies that you should only challenge with the appropriate level.

Scroll over the map with the cursor to find out which province you should avoid first.

1.9 Which Buildings do I build First? During your Viking adventure, the game will recommend a few buildings for you to build.

First of all, you’ll want Assassin’s Office to unlock Templar objectives. After that, we recommend the mercenary camp at the harbor or the bakery and brewery to strengthen your clan.

As your settlement increases in level, more and more people will join you, demanding new buildings. NPCs will also join you, forcing you to buy the necessary materials for them. During your journey on horseback through Assassin’s Creed Valhalla, you will repeatedly encounter NPCs with a question mark above their heads.

These offer you interesting information for a small amount of silver, allowing you to purchase valuable information on new locations marked on your map.