“You want to play Xbox One Games that are Playable on Xbox Series X/S, but don’t know which one to choose?

Luckily Allkeyshop is here to help you with this top 15 of the best Xbox One Games that are Playable on Xbox Series X/S !”

If you want more details on Xbox Series X/S release date and compatibility, read this article.

Once again take on the role of Master Chief and save humanity in an epic Halo campaign that allows you to explore the Halo ring itself. Face off against old and new foes, wield powerful weapons, and utilize new tools in an open-world campaign, or create your own epic Halo content in Forge mode. Red vs. Blue multiplayer returns in intense PvP action across multiple modes including Slayer, Capture the Flag, and King of the Hill.

Play as V, a mercenary obsessed with seeking out a one-of-a-kind implant that is the key to immortality in the open-world of Night City. Cyberpunk 2077 features a first-person perspective, with V’s face, hairstyle, clothing, background, body type, and modifications, all customizable. Play several minigames that include hacking, boxing, auto racing, martial arts, and shooting ranges.

Set sail for England and launch devastating raids on the Saxons in a true open-world RPG, and be the Viking Norway needs. Construct tattoo parlors, blacksmiths, barracks, and upgrade them as you grow and expand your settlements. Dual-wield axes, swords, and shields and defeat your enemies in bloody and immersive combat.

Save the world from the Others, deranged mutants with the taste for human brains, and uncover a story of courage, loss, and bonds. Using your psycho-kinetic abilities, lift, throw, and break the world around you and use the environment as a weapon. Protect a futuristic Japan and defeat the Others at any cost. Humanity needs you.

Save London from itself, and set it free from the advanced surveillance system, ctOS. Recruit allies, each with their unique skillsets, complete unique missions, and explore an open-world setting in your bid to liberate London. Control multiple characters, but be careful as losing that character will see them lost forever.

Slay to the beat in this unique first-person shooter rhythm game and bring down the ruler of Hell. Murder demons in over-the-top destructive action, or get in time with the music’s beat to unleash powerful and devastating attacks. The soundtrack is created by musicians, such as Matt Heafy from Trivium, and will have you screaming along when the action ramps up.

Discover an original Avengers story set after a devastating tragedy occurs and forces the Heroes to disband. Play through a campaign that tasks you with rebuilding friendships, restoring powers, and taking down the new force, AIM. Unlock classical, fan-favorite, and new outfits for the Heroes, fight against enemies in scaling difficulty, and assemble a new team online in Hero and Warzone missions.

The world has fallen to The Swarm, and humanity is on the brink of destruction, and the only hope is you and your squad. The game features an in-depth campaign, allowing for up to 3-player online co-op action. Fight across multiple modes, including Escape, Versus, and Horde. The Map Builder allows you to create custom maps and share them with your friends.

Become a pirate legend with no set roles and the freedom to tackle the open-world and other players as you choose. Sail with friends, hunt, fish, trade, and kill skeletons across 11 story-driven tales. Sea of Thieves is a continually evolving game with new missions, loot, and crews adding to the already massive world with every update.

Shrink to the size of an ant and survive alone or with friends in the backyard, uncovering secrets, danger, and a unique story as you explore. Build, craft, and fight the elements and giant insects in a beautiful persistent world where the insects react to your actions. 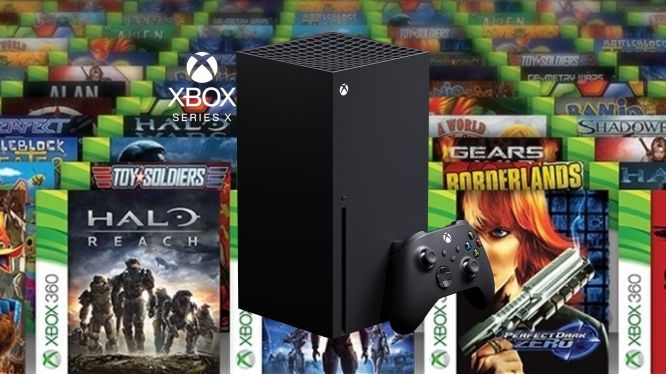 Although not all Xbox games will be backward compatible with the Xbox Series X, it can play Xbox One, Xbox 360, and original Xbox games, with more being added over time.

The Xbox Series X is the most powerful console to date and will backward compatible games benefit from improved graphics, better frame rates, and faster loading times.

Why Are We Doing a Top 15 Xbox One Games Playable on Xbox Series X/S List?

Xbox One Games Playable on Xbox Series X/S are available at incredible prices, but with so many to choose from, we want to help you pick the game that’s right for you.