“You want to play a Split-Screen Co-op Games, but don’t know which one to choose?

Luckily Allkeyshop is here to help you with this top 15 of the best Split-Screen Co-op Games!”

Designed exclusively for co-op, work together to escape prison, and gain your freedom. Play as either Leo or Vincent and play through a story in which both men must learn to trust each other if they are to break free. Sneak, fight, run, or drive your way to freedom as you solve puzzles and overcome obstacles together.

A Way Out System Requirements

Explore, discover, and survive in a fully-immersive RPG where danger lurks at every turn. Survive the wilds alone with a friend online or in split-screen multiplayer, and learn to defend yourself against creatures, diseases, and the environment. Learn spells, uncover new lands, cities, and dungeons, and live with the choices you make.

Defend Earth and humanity from the Primers, an alien force with nothing but destruction in mind. Fight in massive battles where enemies swarm from all sides, watch armor peel from your enemies as you shoot them, and unlock new classes as you complete missions and objectives. Take on the alien threat alone or with friends in 4-player online co-op and split-screen modes.

Be the best super-villain you can be and unleash havoc upon the world in an action-packed campaign of mischief and mayhem. Discover the intentions of Earth’s superheroes and, with the help of The Joker, Harley Quinn, and many others, come together to stop their peaceful plans.

Inspired by the racing games of the 90s, Horizon Chase Turbo offers unlimited speed, classic arcade gameplay and graphics, and fun on every lap. Race in sunsets, rain, snow, and volcanic ash as you compete in 12 racing cups worldwide. Unlock dozens of cars, upgrade them, and battle across more than 100 tracks in online and split-screen multiplayer.

Ride the walls, ceilings, and everything else in this gravity-defying combat racing game. Blast your opponents and race your way through 29 twisting courses where speed is everything. Use power-ups, turbos, guns, and missiles as you battle to be number 1 in split-screen or online multiplayer modes.

Your favorite toys from the 80s and 90s come to life in this battle for the Hypercore. Survive endless waves of enemies, build defenses, play in first-person and third-person, and fight across multiple locations, including bedrooms, garages, and toy stores. Jump online and play co-op or PvP game modes.


Race to the finish line in this blisteringly fast arcade-style racer. Smash records and drift like a pro, but don’t slow down as doing so detonates the bomb on your car. Race across several game modes, both offline and online, including cops and robbers.


Take control of your simulated physics-powered crab and defeat other giant crabs by flipping them over in this unique 3D fighting game. Run along walls, wield weapons such as swords and chainsaws. Complete the campaign solo or with friends and challenge yourself in more than 41 battles.

Hit the road as the blue hedgehog and compete in up to 12-player races in offline or online game modes. Race as a team, with various team moves available and a Team Ultimate to unleash. Unlock customizations for your vehicle, and use offensive and defensive items. Game modes include Grand Prix Mode, Exhibition Mode, Team Adventure Mode, and Time-Trial.

Roll through the ages and compete in 4-player matches. The game features more time periods, improved graphics, and all-new physics. Roll down hills, smash everything, and battle bosses.

Go head-to-head and play in fast-paced first-person action in split-screen shooter mayhem. Wield ten insane weapons, play nine game modes, customize your game, and look at your opponent’s screen to get an advantage.

Defeat the Locust and Buzzkill your way through a brutal, unforgiving, and relentless campaign. Fight in different weather, wield devastating weapons, and jump play through the entire campaign with a friend in local or online co-op.

Immersive yourself in photorealistic environments and fight across the galaxy in epic battles featuring iconic characters from the Star Wars universe. Fight on the ground on planets from the original Star Wars trilogy and use ground vehicles such as the speeder bike and AT AT. Defeat your enemies in the skies and fly X-Wings, TIE Fighters, as well as more.

What is a Splits-Screen Co-op Game?

A Split-Screen Co-op game is a multiplayer game played on a single screen. 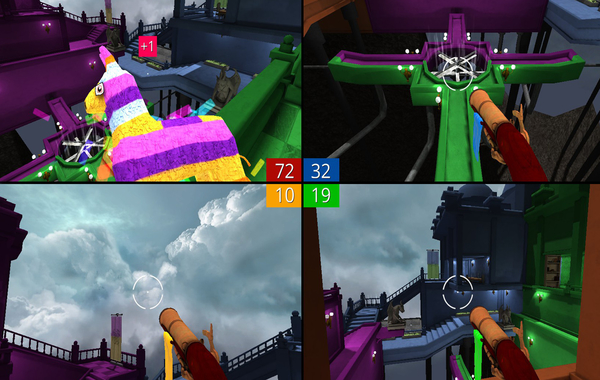 Players share a single screen and must work together to succeed. Often they share lives or must begin from the last checkpoint if one player dies.

Playing a game cooperatively on a split-screen has advantages and disadvantages. It can improve teamwork but has the negative effect of reducing each player’s viewable screen.

Why Are We Doing a Top 15 Splits-Screen Co-op Games List?

Splits-Screen Co-op Games are available at incredible prices, but with so many to choose from, we want to help you pick the game that’s right for you.