15 of the Best City-Building Games and Compare Prices

“You want to play a City-Building Games, but don’t know which one to choose?

Luckily Allkeyshop is here to help you with this top 15 of the best City-Building Games!”

Expand your empire and advance your culture again in this latest game from the Sid Meier franchise. Choose one of twenty historical leaders, including Roosevelt and Victoria, and expand across the map. Unlock boosts, explore and develop your environment, discover new cultures, build alliances, and combine units to destroy your foes.

Play one of the most popular strategy games ever, now fully remastered with three new campaigns and four new civilizations. Choose between the original AI, the updated HD Edition AI, or the newer AI developed for the Definitive Edition. The game features all of the original campaigns, the expansions and boasts more than 200 hours of gameplay and 1,000 years of human history as you begin your quest for world domination.

Build the city the people deserve in this open-ended city-building simulator from Finnish game developers, Colossal Order. Balance essential requirements such as education, water. electricity, police, fire fighting, healthcare and much more along with your city’s real economy system. Build or improve on existing maps and share them on the Steam Workshop.

Build a new home in a war-torn Middle Ages land and carve a destiny that will continue for generations to come. Begin with nothing and learn to hunt, craft, farm, and cook. Build your single home into a thriving village full of others who work, hunt, and fight for you. Survive the winter months, rule your land however you want, and create a home for you and your family. Complete the main storyline, or explore the vibrant world that will become home to your legacy.

Command the armies of the past in this HD version of the classic grand strategy that defined the genre. The game contains all previously released content, updated visuals, 4K support, and two brand-new civilizations, the Swedes and Inca.

Explore a new land as a Viking and survive dire wolves and undead warriors as you bid to bring glory to your clan. As a Northman trade, invade and devote your life to the gods as you build your settlement on the new continent of Northgard. Assign your Vikings to jobs such as farmer, sailor, or warrior, and manage your resources to get through the harshest winter that you have known. Play against the AI or friends, and head online to climb the ranks and become a Norse God.

Build your sprawling medieval city in this grid-less city-builder simulator. Extract resources, produce goods, design monuments, build churches and castles and share everything with the full community mod support available. It also features an original soundtrack composed by Paradox veterans. Use the robust building tools given to you to develop an organic city that grows with you and your ambitions.

Build your new home on the red planet and be one of the first to colonize Mars. Learn to survive and build smartly, ensuring the needs of the population with oxygen, power, and entertainment. Research and adapt as you build a home away from Earth.

Survive through the ages and expand and evolve as you battle the environment and animals that roam the land. Hunt for resources, craft clothing and tools, and plan for winter’s harsh realities by stocking up on food. Build homes, research technologies, mine for stone, and unlock new ways to produce resources as you expand your settlement and population.

Rule with an iron fist, or give back to the people as El Presidente returns for another term in office. Customize your palace, build bridges, tunnels, and improve the infrastructure of your island. Manage multiple islands, complete challenges, and steal monuments and wonders from your neighbors for your collection. Rule your paradise alone or go online and show the rest of the world how good your management is.

The sequel to a strategy classic releases with a new engine, new units, and more game modes. Design impenetrable strongholds, repel your enemies with deadly traps, or enter sandbox mode and build your castle without fear of attack. Play together in co-op mode, and share the building duties between you.

Expand your Rimworld experience with RimWorld Royalty. This expansion adds Royal Titles which allow you to upgrade or choose an imperial permit. Psychic powers are also added, giving you an advantage in combat – you may also use it for community management. This also adds a huge variety of quests which in turn will give more rewards. You’ll also get to enjoy a full album filled with new music, tons of new gear, and Mech clusters.


Control a group of exiles as they attempt to rebuild their lives in a new and dangerous land. Build structures, craft items, and tools, gather resources, and trade with no skill trees to stop you. Keep your townspeople happy and watch them flourish under your leadership.

Play God and guide your fledgling civilization of Nuggets from the dark ages to the space age and beyond! Manage planets and watch your civilization evolve and advance through the ages. Create disasters, interact with objects, and even punish the unfaithful with the godly abilities at your disposal. Control the collection of resources and how they are utilized, destroy or maintain ecosystems, survive natural disasters, and discover unique planets as you leave your mark on your universe.

What is a City-building Game ?

City-building games are simulators where the player assumes the planner’s role and must grow, expand, and manage their city or town. 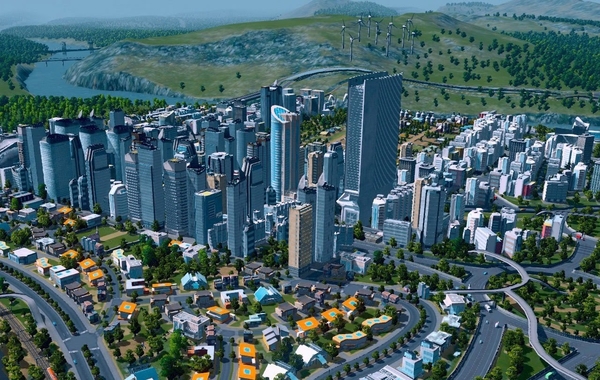 City-building games require the player to use strategy, with them needing to plan space, build placements, resource gathering, workforces, and salaries.

These games often feature events, such as natural disasters or attacks from outside the city. The events add variety to gameplay and can force the player to adapt to the situation accordingly.

Why Are We Doing a Top 15 City-building Games List?

City-building Games are available at incredible prices, but with so many to choose from, we want to help you pick the game that’s right for you.