15 of the Best Sports Games and Compare Prices

“You want to play a Sports Games, but don’t know which one to choose?

Luckily Allkeyshop is here to help you with this top 15 of the best Sports Games!”

The best football management simulator returns for another year with updated stats and improved match engine. Take control of one of the 2,500 clubs available from 50 nations, or create your own as you guide your team to glory. Create tactics, scout for players and staff, make requests of the board, talk to your players, lead team talks, and watch matches unfold in 3D or 2D.

NBA 2K21 is set to drop with improvements in graphics, gameplay, game modes, and online features, including the return of MyTEAM. Experience what’s it’s like to be a sports star and blur the lines between video game and the NBA stardom, with unrivalled immersion.

Celebrate twenty-five years of PES with updated rosters, improved graphics, and new features. Play as some of the world’s biggest teams, including Juventus, Barcelona, Bayern Munich, and Manchester United, and compete in offline and online matches. Unlock rewards, customize your team in myClub, or lead a football club to ultimate glory in an epic single-player mode.

Play with the PGA Tour Pros and dominate the green on real-life courses to become FedExCup Champion. Create your MyPLAYER, customize your course, and learn to play and master your game with real-time tutorials and shot suggestions. Play local and online multiplayer across multiple modes including Stroke Play, Skins, and 4-Player Scramble.


Climb into your favorite race car and hold off the competition on iconic tracks in Automobilista 2. Race in karts, Grand Prix cars, trucks, and high-performance prototypes across five continents with the game’s cutting-edge graphics offering unrivaled immersion. The game is ever-evolving and features a dynamic weather system, 24-hour cycles, changing conditions, and skill-based matchmaking for an improved multiplayer experience.

Race in stylized environments in some of rally’s most iconic cars. Challenge yourself across 60 stages in Career mode and enter the driving seat of more than 50 cars. Tackle the turns however you want and learn to counter-steer, left foot brake, and more as you race to the top of the online leaderboards.


The ultimate baseball management simulator returns bigger and better than ever, with all-new features, options, and UI improvements. Take control of your officially licensed team from MLB, MiLB, and the MLBPA, or create your own team using updated player cards, player ratings, and up-to-the-minute rosters. Play pitch by pitch, or play by play, build your team’s ballpark and take part in authentic drafts.

Out of the Park Baseball 21 System Requirements

Experience extreme downhill freeriding, where mistakes have real consequences, and bid to become the next Descender. Worlds are procedurally generated, offering different jumps, slopes, and hill bombs with every play. The game has a fully-featured online Rep system that allows players to build rep and unlock new bikes and threads.

Prove yourself in some of the most powerful cars on the planet and dominate on more than 70 unique routes. Become the new star in Career mode and earn sponsorships, rewards, and defeat your rival. Jump into the driver’s seat with friends with local split-screen or enter online competitions with support for up to 12 players.

Race for the 2020 NASCAR Cup Series in the official NASCAR video game. The game features all the official teams, drivers, cars, and 39 authentic tracks. Play across several game modes, including Career, Quick Race, and Test Session, and jump into multiplayer in fast-paced online and split-screen action.

With all-new dynamic weather and physics and a rebuilt career mode, take on the most challenging racing competition. Race as one of the 50 teams across 14 rallies and more than 100 special stages from the 2019 season. Take the off-road challenge online and complete weekly challenges, and enter into the WRC eSports action.

What is a Sports Game?

A sports video game attempts to recreate the sport on which it is based. 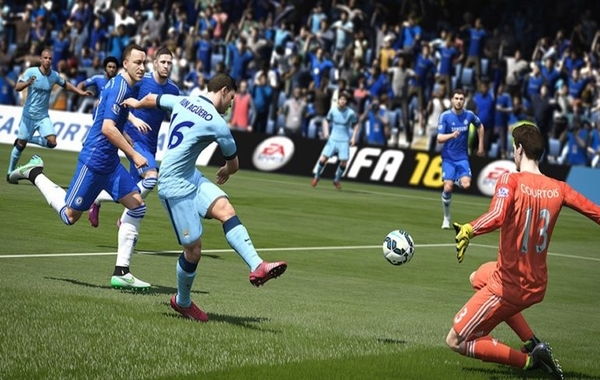 Sports games are competitive, focusing on online multiplayer to drive competition through online leaderboards and leagues.

Sports games include the following types:

Why Are We Doing a Top 15 Sports Games List?

Sports Games are available at incredible prices, but with so many to choose from, we want to help you pick the game that’s right for you.