“You want to play a 4-Player Local Co-op Game, but don’t know which one to choose?

Luckily Allkeyshop is here to help you with this top 15 of the best 4-Player Local Co-op Games!”


Fight as your favorite character in the ultimate Super Smash Bros. game, with returning and all-new fighters. Fight with new fighters including Ridley, Inkling, Simon Belmont, and King K. Fight on new stages with faster combat, new attacks, and new defensive options. Battle against the AI, fight a friend in 1v1, or take the fight online with 4-player and 8-player battles available.


Explore the world, build a camp, discover hidden treasures, and dig ever-deeper with friends in local split-screen multiplayer. Spelunky 2 features a bigger world, new monsters, better traps, and more ways than ever to personalize your game. Ride mounts, interact with new NPCs, and unlock the world’s mysteries with the help of the community in this delightful platformer.

Puyo Puyo Tetris smashes together two award-winning puzzle games and combines them to make an easy-to-play, fun, and addictive game. Challenge yourself in offline and online game modes. Swap, fuse and clear the boards to earn ranks and climb the leagues. Or sit back, share, and watch your previous matches with the in-game replay feature.

Assemble your team of heroes from the cast of the Avengers, Guardians of the Galaxy, and the X-Men, and team up with friends to defeat Thanos and save the universe. Race across the universe, find the Infinity Stones before your enemies and explore iconic Marvel locations as you dive deep into a unique story featuring recognizable heroes and villains.

Lethal League Blaze is an intense, fast-paced brawler featuring local and online play for up to four players. The aim of the game is to beat your opponent using the power of the ball. With every strike, the ball increases in speed, challenging you to think fast and act quicker. Unlock extras, discover secrets, play across multiple modes for more casual or hardcore play, and play to a banging soundtrack to get your adrenaline pumping.

Inspired by the games racing games of the 90s, Horizon Chase Turbo offers unlimited speed, classic arcade gameplay and graphics, and fun on every lap. Race in sunsets, rain, snow, and volcanic ash as you compete in 12 racing cups worldwide. Unlock dozens of cars, upgrade them, and battle across more than 100 tracks with support for online and split-screen 4-player multiplayer.


Step onto a deserted island and create a new paradise for yourself, as you create and customize your own virtual getaway. Customize your character, home, decorations, and the island itself. Gather resources, craft furniture, and tools, learn to fish and hunt, and play with friends with support for up to 8 players.

Battle it out on the court with friends and family in this ultimate tennis experience, featuring iconic characters and multiple game modes. Compete in tournaments, complete missions, defeat bosses in intense battles, and show off your skills in local and online multiplayer. Store up energy, unleash powerful shots and master the motion controls as you play tennis like the pros.


Set at the end of the Second World War, find out what really happened at the end of the first game, and finally uncover who is hunting you down. Play as Vinnie, with enhanced movement, aiming, jumping, weapons, and abilities. Complete the epic campaign single-player or with a friend, and explore the rich environments and humor that make this game unique.


This Smash Bros. like game offers fast-paced action, fun gameplay, and unique characters set in a platform fighting game. Face-off in intense battles with up to four-player local and online support, and master each character and their abilities, including the unique Clutch Technology button, to dominate the field. Compete in multiple game modes, including 1v1 ranked, and Slap Ball, a team-based game mode where the goal is to slap a ball into the other team’s basket.

From the creators of Rogue Legacy, embark on a unique co-operative journey where everyone must play their role to save the world. Communicate and coordinate with your team to battle unique enemies, unleash devastating attacks and combos, and share abilities. Explore rich environments, dive into a rewarding story, and battle or fall together in a war-torn world destined for destruction.

Explore Mexican culture and folklore, and interact with whacky characters in this co-op platformer where smashing bones is everything. Set off on an epic journey with all-new powers, abilities, moves, and enemy types. Uncover bigger maps, complete challenges, unlock upgrades, and play it all in drop-in/drop-out 4-player action!

What is a 4-Player Local Co-op Games?

4-Player co-op games are played cooperatively or in versus modes in LAN, split-screen or online game modes. 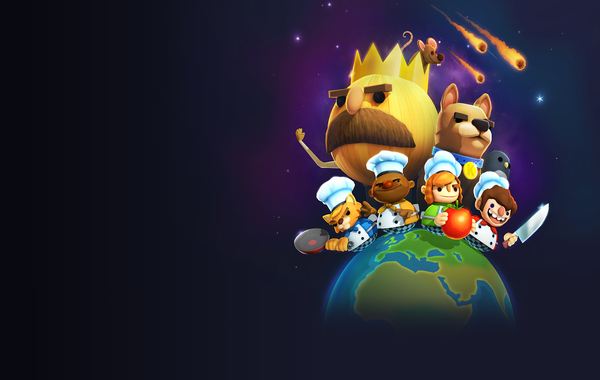 These games heavily feature and promote cooperative play, often having players work together to complete levels, challenges, and objectives with failure occurring when all players are dead. Most 4-player co-op games will often have players use pre-made characters, commonly with unique classes, weapons, and abilities that force them to work together. They can feature PvE and PvP, with modes including survival and story elements, with players earning individual rewards for successfully completing objectives.

Why Are We Doing a Top 15 4-Player Local Co-op Games List?

4-Player Local Co-op Games are available at incredible prices, but with so many to choose from, we want to help you pick the game that’s right for you.